I was delighted to receive an email yesterday that let me know my submission to their ‘Seasons’ online show was included. I love the online shows as I’m able to enter some of my larger pieces that would otherwise not be shippable to a distant gallery.

Golden Sunset is not only called that because of its color but because I created it during a Golden Paints seminar in which we were given samples of a bunch of different paints and textures and encouraged to play with them in a guided creation that showed different ways to use most of the products.

Inevitably I worked on it further once I got home!

Last month I shared that I had some of my work accepted into the ‘Seascapes’ show with an online gallery in the UK, and that they were going to create a little video of the winners, showing their art as it would look on a wall.  Well, HERE it is!

One of the advantages about online showcases is that the work doesn’t have to be available, and the particular painting that is in the video went to its forever home some time ago.  One of the disadvantages, I guess, of having someone mock-up the video is that the painting is depicted much larger than it actually is.  Oh well!

A couple have commissioned me to paint a large waterscape for their new living room and they’d like me to deliver it and put the finishing touches on it, then stay for the rest of the weekend.  Oh hardship, they are dear friends who have moved to Rosarita Beach. I must be looking forward to the long weekend that I’m going to be spending by the ocean;  in the last week I have completed two ocean paintings.  Well, they’re mostly sky – you know me, but they both have the ocean in them and ocean poetry on them.  This one is going to be on the cover of my next poetry book, Mixed Weather, which I hope to have out by mid August.  Here’s the poem written for it and painted into it:

The days of ocean sailing past
the waters flown to feel less vast
and yet its power remains, for we
relax, when gazing ‘cross the sea.

Sometimes, there’s just something about a painting that you love that spoils it.  And the worst part is when you can’t figure it out.  Or maybe the second worst part.  For me the worst part is realizing what you need to fix… after it’s sold. 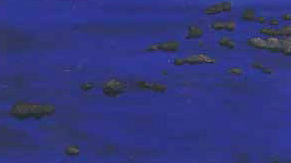 So I’ve wondered over the years why ‘Salton Sea Sunset II’ never sold.  It won an award at the county fair and a lot of people loved it. But.  I realized there was always something about the rocks.  The way I had done the shadows on the rocks made them look like they were floating balls. I realized this when I was working on two commissions of a similar view, both of which involved reproducing an existing painting(s), which had rocks in the water.

As I was painting the shadows of the rocks – or the waves and rills where they sit in the water, I realized what I was doing wrong.  Now they look like rocks!

I’m actually glad I didn’t sell that oil painting – now that I’ve fixed it I’m really** happy with it.  Hopefully the leap to the level of perfection will mean it now will find its forever home.  Here it is, strutting it’s stuff on the website.