When I was setting up for Palo Alto, I was setting the shelf in my desk and found out I’d inadvertantly packed a gecko. Far away from his natural climate, this little critter would not have survived to be released onto the streets of Palo Alto. I needed to take him home.

My friend Cindy went into Pete’s and begged an empty cup from them, and he spent the day in cup jail in my booth.

That evening, having found that he eats various bugs, I was looking around my airbnb, thinking ‘I need a fly’. Then, I found a spider! I scooped it up and added it to the cup, which by this time had some natural materials in it so as to not be quite so boring.

I left him at the airbnb on Sunday, and in the evening brought him out so he could have a warm up on my hand. After he no longer felt chilly, he wanted to run around a little more, but it was time for bed before an early start.

I put him back in the cup – really? his little face said, cup jail again?

What did I do to deserve this?

We’re going home in the morning!
You’re really going to take me home? was the quizzical expression.

Really, you’re taking me home? You mean it?

The one expression I didn’t capture was the look on his face when I put out the contents of the cup in the front yard. He looked around, then looked at me. Wow, you kept your word! I’m home.
Then he zoomed off into the oleander at gecko speed.

On Friday I hung a group show featuring work of pets and animals at the Vanguard Gallery in Moreno Valley.  It features the following artists (just in the order they are on the wall):  Sandy Zelasko, Mike Holder, Kelly Vela, Jeni Bate, Terry d’Chacon, Kay Levie, Diane Morgan and sculpture pieces by Janice Osborne and Alana Marston.  The show will be up through June 28th. 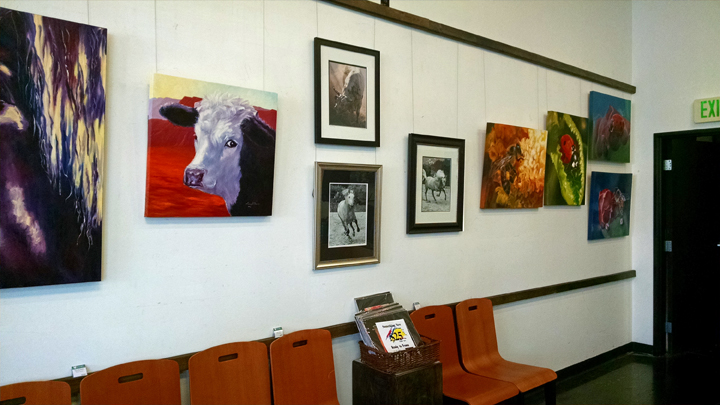 From the right: 4 paintings by Diane Morgan, 3 photos by Kay Levie, 1 painting by Terry Chacon. Under, a basket of prints by Mike Holder

Four paintings by Terry Chacon on the right, to the left, a photo by Kelly Vela, two paintings by Jeni Bate and two of Janice Osborne’s glass sculptures 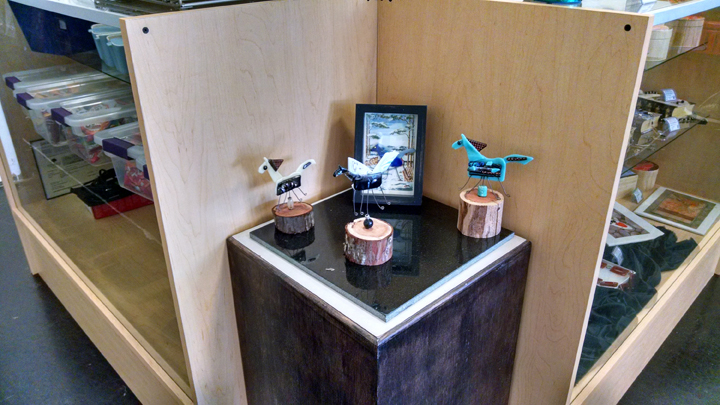