“Daybreak on earth”‘s name is inspired by the beauty that I am still seeing in ‘Dawn off my back porch’, and the fact that the Salton Sea is drying up.  Some day in the not too distant future there will be no water reflection.  And it’s not just here right in our lap, it’s everywhere.  Climate change is observable in our lifetime and will eventually render the planet utterly different than we know it.  But it is still worth getting up in the morning and seeing what the world has to offer because as far as anyone knows, there are no dawns and sunsets in heaven.

“Daybreak on Earth”, 9×12″ refractured watercolor on panel. $110. The poem written for and painted into this painting is: Daybreak in heaven never looks like this! Heaven has no day and night

Mexico City’s public art is an integral part of the city’s identity and history. But in a country prone to devastating earthquakes, what is the fate of these creative monuments, asks Martha Pskowski – and is meaningful preservation possible? Mexico City is a bastion of public art in the Americas, with murals, mosaics and monuments lining its […]

via Preserving public art in a city of earthquakes — thinking city //

Before you get too excited about my achieving second place with my chalk painting last Saturday in Moreno Valley, it was a very small field of competitors.  I also had a small booth at the art fair and my beloved was being the store keeper for me, while I wore off my fingerprints.  I discovered fairly early on that our choice of space to set up (chosen because putting Doug under the tree in the shade would allow me to use the umbrella to keep the blacktop I was working on from melting my fingers), was in front of the band.  The band (there were several during the course of the day) and the between-bands background music was LOUD.  So, to relieve Doug and allow him to walk around and repair his eardrums and sanity, I hurried through my work.

The need for speed was exacerbated by wind which took the umbrella for a tumble and meant I had to chalk with one hand while quickly rubbing the chalk into the now-scorching blacktop with the other.  I finished in 2 hours, and apparently was the only one who completely finished, though other chalkers, intending to take until 4pm created larger compositions.

I had a limited amount of blue, so did the surrounding ‘atmosphere’ in red, rather than follow the original, and created far less clouds than on the mixed media painting this was based on. For this it’s more about the message than the accuracy of the map. 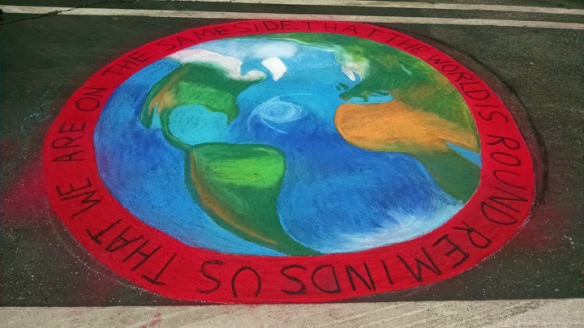 “That the world is round reminds us that we are on the same side.”

I have to say that this was one painting (or pair of paintings) executed under the most hostile of weathers.  No, not so much heat, but the desiccating wind.  I had to stop on the second morning and go back for a short session closer to dawn on the third day, and then it was a struggle.  The good news is that once I’d drawn up the letters, I could quickly go from one side to the other, painting layers, knowing full well that that my start point would be completely dry by the time I returned to it in about 25 minutes.  At the end of the second day I had to quit because the paint was drying on the brush.  The east side of the boat was too hot to work, and the west side, in the shade and wind, I was shivering.  And I still had to figure out how to spray with an acrylic glaze with the UV component – in a stiff breeze.

Nevertheless ‘Poseidon’ has its name on its sides and today will be test launched.  Eventually this boat will carry a solar powered pump which will pump water from the Salton Sea into the marina ‘fingers’ in Desert Shores, to maintain the water level and mitigate red agae.  Launch day is on Sunday. 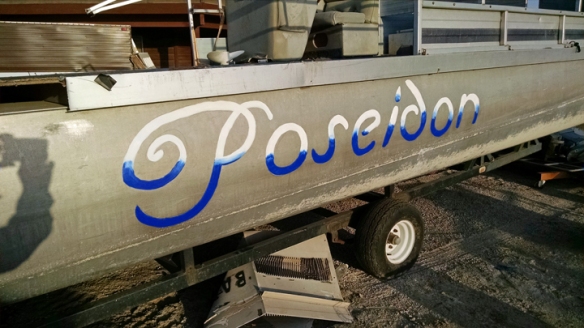 It didn’t rain at my house overnight on Saturday. However when I got to Indio, I found that there had been two hours of steady good rain there. Ugh. The city people had gotten there a little earlier and removed all the tarps to let the paintings dry. They needed to be dry before we could start on repair work, so we had a little time to commiserate between each other before we could start. Rafael’s painting – Lincoln, and Bijan’s painting (we think we read each others’ minds when we came up with such similar design ideas) had the most damage.

Some damage to the right hand corners and both hands that required a little rework. The throat dried out fine. The wash marks on the ocean wrist I just incorporated.

There were still puddles around 9:30am

Bijan’s tarp leaked, causing a lot of damage on the neck and into the clouds. 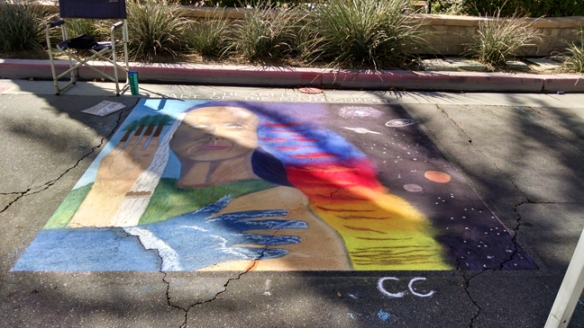 Repair work done, just in time for the judging. Except that about 2 minutes before Kathy came by, a woman let her 3 year old run through the painting. Then yelled at me for chiding him!

The last competitor finished later in the day.

Amateur entries continued throughout the day, to the extent that there was so much judging for Kathy Dunham to do that the awards ceremony was about 40 minutes late. Here were the results in the professional category. The prizes were $2,500, $1,500 and $1,000.

The artist as part of the environment. 8’x8′, chalk on blacktop. (Photoshopped to be vertical, though you can possibly now see some of the foot damage.)

Arrived back from the show in Boulder City, NV happy to meet a couple friends from blogland who had arrived during my absence. They’d never visited this part of the world before, so we spent a couple days doing the Imperial County Tourist thing.  One item they were interested in finding was the mudpots.  I’m glad they pressed me on this as I’ve also wanted to find the mudpots of Imperial County since I heard about them perhaps ten years ago.  So, four or five sets of directions later and several dirt roads, we got there. 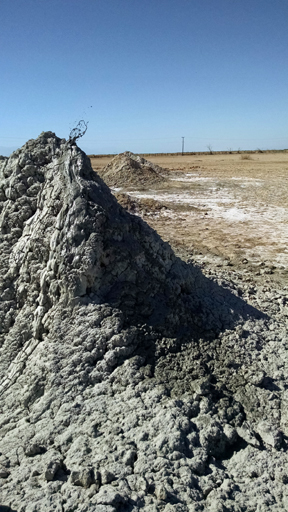 I was surprised that the mudpots are actually around six feet high – from pics I’d seen before I thought they were knee-height.  Once we got near them, not only are they a visual item, but we discovered they made quiet hissing and gurgling noises.  A few of them were active enough to produce small mud eruptions and I was actually close enough to get spat on.  Got a few shots of the action, this is probably the best one.  I wonder if last week’s earthquake swarm in the area invigorates them or calms them down?

No, I’m not referring to having seen those lights in my rear view mirror recently.

I was intrigued by this article on CNN.com about the Curiosity rover on Mars photographing a Martian sunset.  (They’ve been there how long and only now think to look at the sunset…??? <sigh>)

The sky on Mars goes blue towards sunset.  I think it curious that on the blue planet, the blue sky tends to go red towards sunset, and on the red planet the reverse is true. Check it out.