Something else that fell out of the end of the pen…..

Play with time.
Play with time and mold it
like a consequence of childhood,
a wrong turn in family, leading to
raising more of a hellcat than a child.

Play with time
and fold the horror back into itself
until it is no more than a streak
as inconsequential as a minute
you only remember when reading your diary.

Play with time
until the book falls out of the window
when you move out
and life becomes a Play-Doh landscape
that is finally your own.

Got the inspiration for this one while doing a little clean up for my absent neighbor.  I was working early in the morning before it got way to hot, even for the acclimated desert rat, to be doing yardwork.  I decided to turn the inspiration into a kid’s summer day because the first line had a bit better ring than ‘I caught the sun while grubbing in the yard…..’

You caught the sun, you held it like a ball
in two-year hands – a shining rounded joy
so newly given, a perfect rolling toy
and never thought that it would burn at all.
Your retina was blotched from gazing up,
your shoulders burned, your face, your arms, your knees
from summer’s day your heart demand you sieze
to dance beneath the heated turquoise cup
of sky. And as earth rolled round to sunset
you played your heart out, flew it like a kite
upon the solar wind, til it grew night
and tiredness told you it was time for bed.
Your red face says you caught the sun today.
Your smile, that it was worth it just to play.

Yesterday I sat in the Gift Shop at the 29 Palms Art Gallery, as part of my contribution for having artwork in the gallery Membership Show over the summer.  This was the first time I had a chance to see the show as I’d been out of town for the reception.

Rear Gallery #2. Something might look familiar to my fans there: “Perspective” and “Arrows”

At the front left is “Hunger Bowl”, a composition for a homelessness fundraiser, that never got picked up. 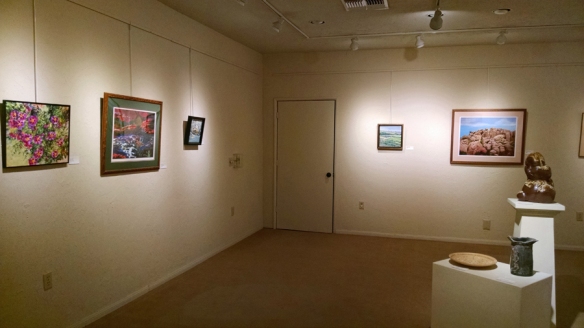 Last shot of the large gallery.

In the evening I attended the opening ceremony and open house for the new Children’s Mental Health Services Clinic in Coachella.  The art on display there is also under review for addition to the artwork for the clinic itself. 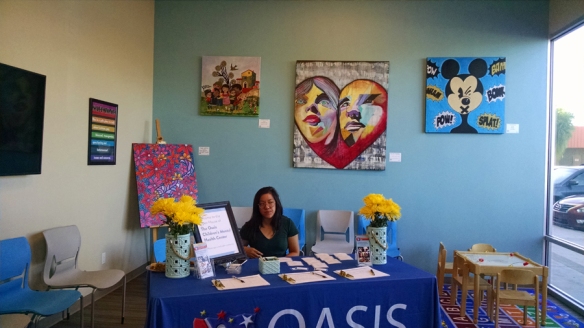 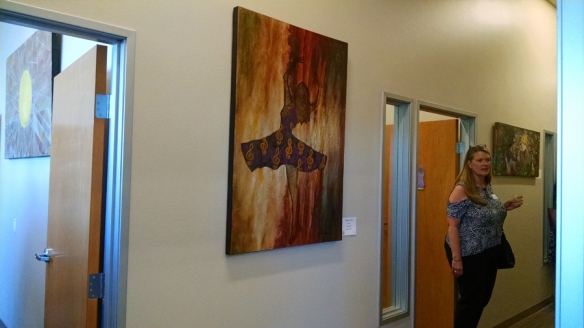 Reception area, some staff members and one of the artists.

A couple short speeches were given about the mission of the clinic.

I must check that the reason my painting is on the easel isn’t because the wire broke!

Secondary waiting area with Mark Anthony and his wife.

We’re back to Eric in Ventura for a very interesting challenge, which brought back a memory too. The challenge was: “miniature lead soldiers that even Andrew Wyeth and H. G. Wells played with. ”

My first husband had these metal soldiers that he would play war games with his buddies on a Sunday.  He used to paint them in the colors that were appropriate to the armies they represented.  Seeing as he worked 6 days, I guess I was technically a war widow from the second day I was married.  On our wedding day, he’d disappeared at the reception; he’d discovered the bar had the soccer on the tv.  That day, Liverpool beat Manchester United 5-0 and it was the happiest day of his life, which apparently had little to do with the fact he’d just got married.  It’s ok, it’s so long ago now, I can laugh at this.

But I don’t think my exes soldiers were lead, so I turned to eBay for some inspiration. I found a listing for 11 battered lead soldiers, some missing arms that were made to swing in marching.

The 11 lead soldiers in an ebay listing that helped inspire the sonnet.

Once we were an army on the field

a green baize table all set out for war

(though none of us could figure out what for),

to calls from mother.  But until that time

we’d all be marched around and fire and drum

amidst their noise of battle, bomb and gun

and yells as some would ‘die’ along our line.

But they grew up and we were boxed for years,

swinging arms were lost, and many men;

our paint was chipped. Now down to just eleven

were rediscovered, sold as mercenaries.

We’re old, disabled.  War is not the same.

We’re just your heroes from a childhood’s game.