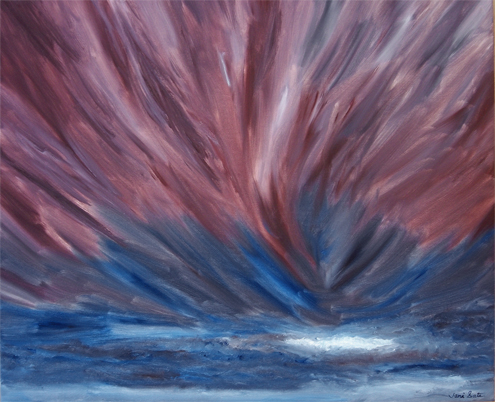 I wanted to paint something a little looser, and somewhat doubtful as to whether there was ocean or land beneath the sky.  I took a hint of the color at the upper part from one photograph and inspiration from ‘Into the Light’ – an earlier painting (actually I did two with that name but the first one I really didn’t like so I binned it). Have only shown this once so far at the last Umbrella show last month, but it will be going out again next month to Fallbrook, unless someone snaps it up before then.  (Lightweight and very mailable.)

I seem to be creating a lot more water pieces these days – this is one of them. 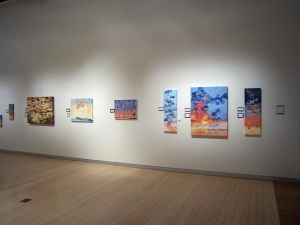 I got to the Yuma Fine Arts gallery about an hour and a half before the reception.  I needed to repair one of the paintings which had a scuff from being loaded into or out of the truck – that wasn’t a big job, so it only took about 30 mins. 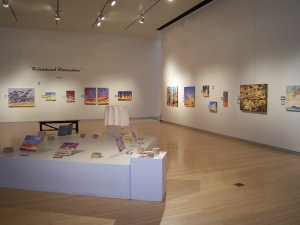 While I was waiting for the paint and glaze to dry I took some pics of the final line up of the show.  You can see from later pics that nibbles are appearing on the tables.

The reception was quite well attended and I spent a busy few hours talking to a lot of people. (And not having time to take photos to show that it was busy!)  We sold about four books and one painting.  Martha, the gallerist, noted that usually the larger purchase come after people have slept on the decision.

During the reception there was a short ballet demo in the main gallery – Yuma has its own ballet company!  I was also introduced as not only a visual artist, but a poet, and read one of the poems from my new book, Mixed Weather.

One of my paintings – Bright Morning – I donated to the fundraiser raffle.  Not sure who won it!

Wiest Lake is my favorite fishing hole.  If you’ve checked out my website in the past you may have noticed my painting of it.  It bears the following inscription along the bottom:  “When we came to the lake with our rods and nets and went to open our tackle boxes, we paused with bated breath – the beauty had hooked us and the peace had reeled us in.”  The location is a blue gem amidst farmland.

Well, I decided it was time for a revamp. One of only two paintings where I have added the refractured watercolor part after painting the surrounding/underlying acrylic painting.  Now it looks like this. Just a little more magical now.

For those of you outside California, we’re having all sorts of water usage restrictions because of the drought.  It’s not just the last few months, it’s been dry for years.  Although we’ve had a couple summer storms, which is a little unusual, they seem to get other parts of the Coachella and Imperial valleys, leaving Salton City dry.  A few days ago there was a storm here, but on the other side of town.  My house got dripped on, that was it.

The ongoing drought was the inspiration behind “Gentle Storm”.  The poem – prayer – painted into it, might just be answered, it seems, if this winter’s forecast strong El-Nino delivers. (But not on weekends please…..art fairs are not as waterproof as one might think….)

“Gentle Storm”.
Oh gentle storm
please bring us rain,
that we might grow
our crops again
That we might live
and laugh and love
and praise the raindrops
from above 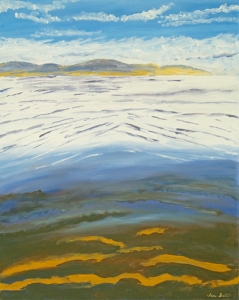 When I hold a paint-n-wine evening, I end up with a duplicated painting.  This time I decided the class would paint “Dark Water, White Wave” an existing oil painting that I love.  So at the end of the evening I end up with a new version of this – in a slightly different size and shape, and this time in acrylic instead of oil.  It is a day view looking east across the Salton Sea.

Last Thursday I held a paint-and-wine class at Vanguard Gallery in Moreno Valley.  I know it’s taken me a while to get these posted – the schedule in between has been kind of full.  Anyway, here now are the pics taken as the class progressed.  I think everyone enjoyed themselves – only one had painted before. 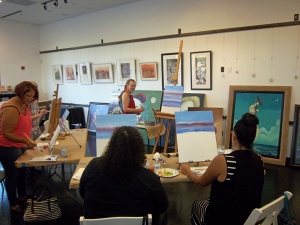 Working on the underpainting

Working on the underpainting…

Time for a glass while the underpainting is drying

Getting some clouds in

Waves are harder than you think… 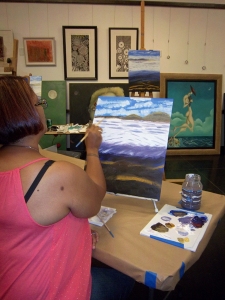 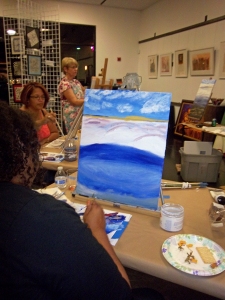 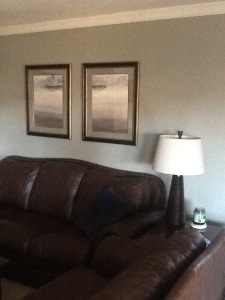 Misty Morning II, at its forever home in Texas

One thing that I don’t often get to enjoy is seeing my ‘children’ settled in their new home.  Occasionally I will take artwork to a customers house to see whether it works in the location they’re considering, but usually I say goodbye to my offspring when they are placed into a box at an art show.  I am particularly overjoyed to see this watercolor diptych in their new frames and their new room as it’s in Texas – and I’ve never met their new ‘Dad’ face to face.

As they’re framed pieces I shipped them unframed and they were a little while before the new frames were chosen, but now here they are above the sofa.  It was also a very interesting way that the sale came to be.  Having ‘met’ their new owner as his client for some online business, during a phone call he mentioned he liked my work and had this place that needed some new art, and described the location and colors of the room.  I recommended this watercolor diptych which wasn’t on my website, and we exchanged some pics of the artwork and the room.  Turned out it was just the thing – the right feeling for the location, the right size and the right colors.

If you missed me at Newport Beach last weekend – or if you just prefer oils and acrylic skyscapes – this coming Saturday I’ll be at the annual Old Town Tustin Art Walk.  Somewhere near the intersection of El Camino Real and Main St I’ll be setting up for the third year at this show.  There’s plenty of other things to enjoy at this community show too.  Check out their website.  Hope to see you there.  Above is one of my newer oil paintings, Larch View, that will be making its debut at this show.

Despite the fact that I live close to the largest body of water in California, it’s not terribly enjoyable during the ‘hot’ season, and Doug and I like to go up to Lake Cuyamaca – up in the mountains, 5000 above the Salton Sea, about an hour and half away, it’s a whole nother climate.   We rented our favorite little cabin for three nights and packed up bedding, fishing gear and the bare basics of a kitchen.

On the first evening we went out for a stroll and saw a lot** of wildlife.  I had left all connections to work behind, except I took some writing paper, thinking I would put a few poems together.  This came out of the evening walk across one of the dams that forms the lake.  You will see once you get into it the tune that it’s based around.  The last line though requires a little more explanation.  We had just crossed the dam and saw a squirrel in the path.  We stopped.  The squirrel stopped.  Then, as we continued, instead of scooting up a tree, it walked down the path towards the dam, just like people walk past each other on a city sidewalk.

On the first evening strolling beside the lake we saw:

Of course, having left all connections to work behind, that included the camera and on the last evening I was unable to photograph the view across the still lake just after moonrise, which confirmed that there is an even quieter cabin on the other side.  I did this from memory.