Here’s the second painting that was created for the Joshua Tree competition.

This is one of a couple paintings that I’ve been holding back because it was on hold for a show in Joshua Tree. Well, it didn’t get picked up as the winner, so now I can show it to you.

I’m going to add the caveat that I think that’s the dimensions…. in the silence since I last posted my laptop was ill and I’ve yet to recover my database to give the exact measurements, and I’m not at home to go measure it again!

My 4-panel painting ‘The Four Hours of Equinox‘ is often mistaken for a row of 4 individual paintings, and people want to buy just one.  The stars one is the most popular, so I thought I would do a just-stars painting in the same shape.

The other night we were sitting outside watching the meteor show, and between falling stars I was making up constellations.  This came out of this!

Above the roof
The dandelion constellation
Grows from the southern horizon
The stem bending to the west
The cluster of stars forming the crown
That could so easily have been rearranged
Taller to form a tulip
Or flatter to describe an umbrella.

Below the moonless sky
The dandelion constellation
Grows as if there is no time
We can comprehend
Only the eons in which
a nebula’s kiss blew at its crown
creating our skyfull of stars
blowing in the galactic wind.

I wrote this one a few weeks ago while watching the Orionids meteor shower.  Next shower is December 13th.

It’s in our hears to wish upon a star
that falls to earth, as if heaven had thrown
a penny in the fountain from afar,
thinking to make a wish all of its own.
Astronomers predict the meteors,
a stone’s throw from a passing comet’s tail.
Perhaps they wish upon them too, like us.
I wonder if they’re sad when wishes fail
to fall into their hands, and wonder why
the luck burned up with space’s Molotov
evaporating in the heat of sky,
leaving a streak for what we’re dreaming of.
Fall slow, fall fast, each shooting star a wish,
a hope, a joy, a heaven’s little kiss.

Thought I was going to sell this one over the weekend at Flagstaff, but it didn’t happen.  Anyway, happy 4th of July everyone, even if you’re not somewhere that’s celebrating Independence Day.  When I started creating this painting it wasn’t especially intended to be a 4th-of-July painting, but after I got the stars down, it spoke to me that this is what it wanted to be.  And like the fact that the shape resembles the triangularly folded flag.  The poem on it is:

The fourth of July
stars bursting against the night
and raining color. 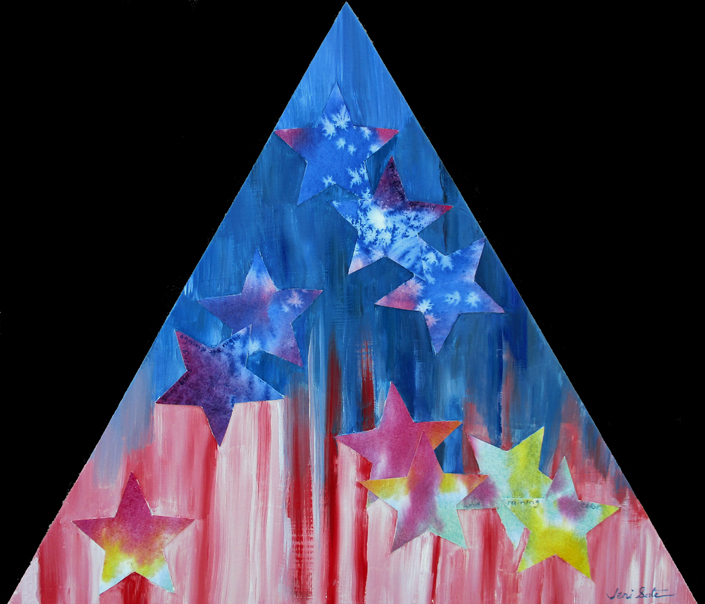 I loved those dark September nights
sitting on the swing
remembering your first delicious kiss
like it would ever happen.

We looked up at the diamonds
spilled on night’s blue-black velvet
so we could choose which ones
would go in our wedding bands.

I loved the last smudge of milky way,
a thumbprint on heaven
before the rabbit brush bloomed.

I loved those damp September mornings
hanging onto pre-dawn
with a cloud full of anticipation,
a present as gray as an area of future.

We looked into each other’s eyes,
mutual sapphires of the soul
and listened to the silence
as if it were the only space between our heartbeats.

You took my hand and promised to speak to the council
within the month about our future together.
Like it would ever happen. 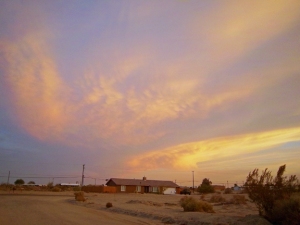 Is that a start eyewall??

This time last week I was at my mother’s house in Wales.  It rained.  I was there for seven days and it rained (at least a sprinkle) for five of them.  On the Tuesday night, it poured, and I was sleeping in an upstairs room that is partly under a flat roof and I could hear the rain delightfully.

I was happy to see lightning across the sea when I looked out the window this morning at about 4:30.  I spent some time attempting to photograph it – my digital is not up to the task so we will see when I get the film back whether I had succeeded.  Accuweather and NOAA had been promising the possibility of rain and this morning there was a brief shower.  I regret finishing the task I was on before going out to dance in it, because it only rained for about three minutes, and I was too late.

This evening, there is a continued promise of rain – but as we are so far from any hills, it’s really just vague maybe.  I did step outside once I saw the sky colors – now this is an interesting formation.  Looks like the beginnings of an eyewall…. we don’t get those around here.  I hope.  But it will likely be the precursor to a painting.  At least if the rain stays away we will have a meteor shower instead tonight. 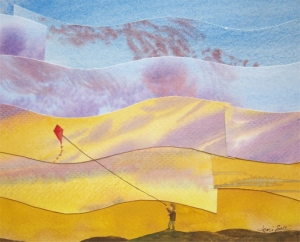 The last couple days have been really windy.  When I returned home on Monday evening, the wind was blowing out of the north, which is kinda unusual, but soon switched back to the west.  We had a respite last night until early this afternoon – then we’re off again.  The Salton Sea turns black and has whitecaps.  If I open a window, everything is soon covered with a thin film of sand.

I have been working on the component watercolor paintings for a large refractured watercolor – 30×40″ – I have nine iterations so far and I think this will probably be enough.  The photograph I’m working from is of a very unusually colored sunset – a dust storm – umber and ochre.

But while the last three watercolor were drying I thought I would put together a collage from the leftovers.  It was one of those that came together really easily – and the name, and the subject was inspired by the turbulence going on outside the studio window.  I had thought earlier it would be nice to sit on the swing at sunset this evening and watch dusk fall over the sea and wait until the stars pop out.  If I sat on the swing now, I would soon be well swung!  It’s certainly too windy for a kite out there – but in here – we can dream. 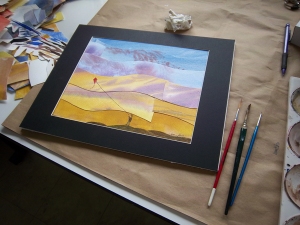 The end of a windy day – on the worktop

At least it’s not hot – the wind, though, does remind me of something a friend said before I moved here.  He was an avid sand dune buggy rider and when I asked him what the place was like, his email reply was ‘It is very hot and windy.  Also, windy and hot.  Did I mention the heat and the wind?”