Here’s an interesting article from just over a month ago about how Humans may have had the edge over Neanderthals.

Not far on its heels came this article about Neanderthal art.  I guess some aspects of art history will remain a mystery, at least for a little while.

Who knew that Vincent van Gogh was a mixed media artist?  Turns out that he incorporated some unusual components in his work.  It is know that he liked very much to paint en plein aire, so it’s actually not that much of a surprise that he incorporated wildlife into his paintings, along with dust and sand.

I thought that this article was very interesting.  About 3500 years ago, a Minoan warrior was buried along with some stone carved artwork.  Now that it’s been unearthed, the details in the artwork suggest a level of artistic knowledge beyond its time.

It is certainly a detailed piece of realistic carving!

There’s something to be said about global warming – like ‘it’s real!!!!’ – when even art museums are changing the way they choose and store art because of it.  I found this article very interesting.  Maybe art that is destroyed when it becomes too wet is going to be ‘ephemeral art’ in the not too distant future.  Perhaps I should start sculpting in stone…..

I always figured that the oldest known art work was the paintings on the caves at Lascaux, but it appears there is another category in the ancient art world – the studio!  Or perhaps it is best described as the paint manufacturer.  I think many people forget how much chemistry there is in art – here’s an article about some of the pigments that they worked with about 42,000 years ago.

It seems though that they hadn’t gotten into being muralists at that time, likely just body painting.  So that classifies it as time-based art.  Or beauty products…..

So sad – a recent Artnet post outlining the (known) destruction of timeless art that has been lost not just to the countries where this war is, but to all humanity that appreciates it. 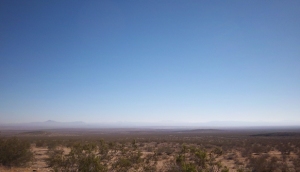 395 blasts a road straight (almost) through the Mojave desert from Adelanto and north and north and  north up the eastern spine of California, clear past state line. The first stretch of it, up to  Kramer Junction, is mostly flat – littered with creosote bushes and other small brush plants that also inhabit my yard, but whose names I do not know. Aside from 395 and a line of power poles, it is all open space. Desert and sky. I think if I have a ghost, I would haunt this beautiful place.

North of Kramer Junction, the road continues flat for a while, but then rises past Atolia  (population 0), Red Mountain (population unlisted) and Johannesburg (population 130) before tracking through the El Paso Mountains and into Ridgecrest. Ridgegcrest is neither on a ridge, nor on the crest of anything. It was originally called Crumbville, but when the
China Lake Navy base was built, (yes, that’s a US Navy** base in the middle of the desert) there was a decision to rename the town, and a lady suggested
Ridgecrest because she had lived in a place of that name somewhere back east (that I figure probably was built on the crest of some ridge) and no one could think of anything better.

My Name in Lights

It’s always nice when you drive into town and see your name in lights. The Maturango Museum was ready for me and we were on time. We spent two hours unloading, unpacking and setting up the show and then took the rest of the day off – it was quite “toasty” outside. Arriving at the Heritage Inn Hotel, which comped us the room, I approached the front desk and told the lady my name, and she knew exactly who we were.

I wrote this on Thursday evening, but the hotel’s internet took the evening off sick, so no posting until today. Was able to post this via the museum’s internet while setting up for my presentation at the reception this evening. 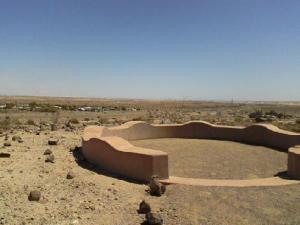 Today I got to check something off the list.   The Imperial Valley Desert Museum opened in January 2011 to house the archeological items from the Imperial Valley.  It’s in Ocotillo –  on the I8 just as it leaves the valley and heads into the mountains towards San Diego. I’d passed it several times but it tends not to be open at 6am or 11pm.  It has a great view overlooking the Imperial Valley.

The museum itself doesn’t boast a lot of windows to enjoy that view, but inside there are things to look at.  It’s still a work in progress – there is a list of displays that are planned, some funded, some not, and a few displays of local photographs, maps and diagrams and some artefacts from their collection.  One was of Ollas (Saa Kaays) – which are large pottery urns used by the Kumeyaay Indians. Another was of oval stones with slots in.  There was no label but the curator, Anne, was happy to explain they were arrow straighteners. She was in the process of preparing labels this morning and that was one of them.  I watched the historical video for awhile and came away with a couple books, a tshirt and an intention to return every three months or so and see how the displays are progressing.  One big item today – the museum is being included in the Federal Museum Association and there is a reception this evening to celebrate this.

On the return trip I was reflecting on the regions during that journey – desert, farmland, desert.  I did stop at my favorite line of trees on S30.  Have taken photos of them a couple times on the way to San Diego, around dawn – this time it was northbound at noon.  I must use them in a painting from that angle soon.